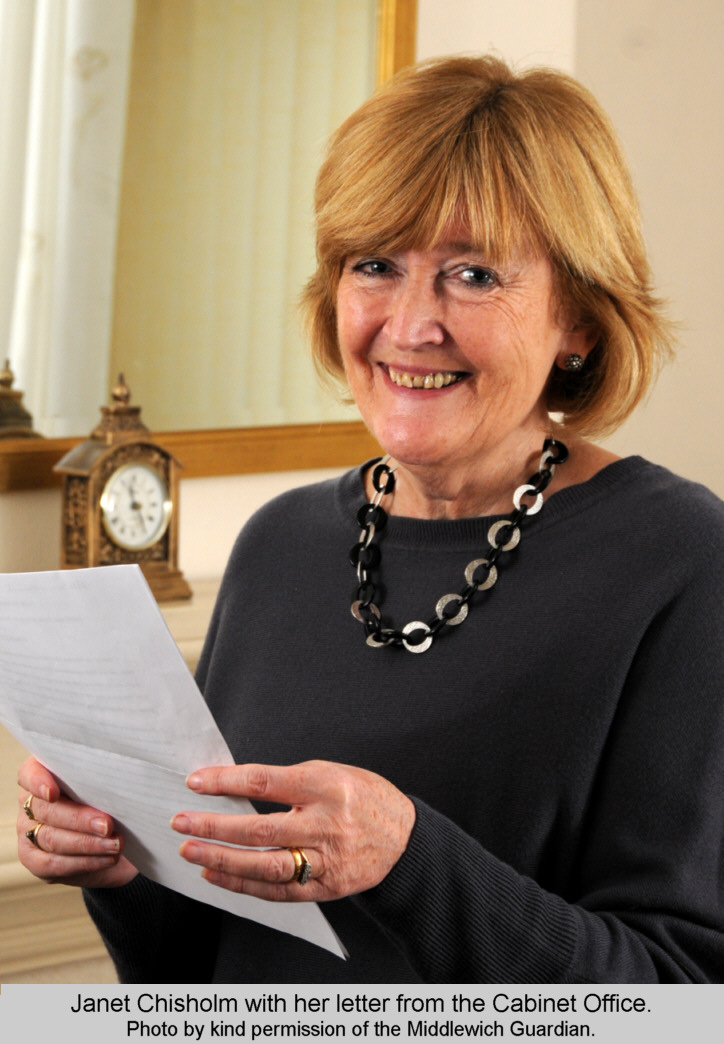 WHEN Janet Chisholm had the brainwave for Middlewich Clean Team all she wanted to do was stop teenagers dropping litter outside her shop.

A decade on, little did the mother-of-two know that she would inspire hundreds of people and be recognised with a royal honour. Janet, of Brooks Lane, has been named in the New Year Honours List for services to the community and will pick up her British Empire Medal at a ceremony in Chester later this year. The Clean Team’s founder has also been invited to a royal garden party at Buckingham Palace.

Janet, who has been married to Ken for 46 years, found out about the honour in November but was sworn to secrecy. She said: “I couldn’t speak to anybody about it apart from my husband which was difficult because I was so excited. “This is fantastic for the Clean Team as it’s a huge recognition for the group. “Many of our members have been there right from the start. There’s no way I could have achieved all this without them. “I do love Middlewich with a passion and I want the best for us and if that means picking up litter and encouraging other people not to drop litter I will continue to do it.”

The idea for the Clean Team began when Janet became fed up with youngsters throwing sweet wrappers outside Chisholm’s newsagents in Wheelock Street. So she attached a bin to her wall with a poster above it which read: ‘Make Janet happy – use the bin’. Friends and community leaders were inspired by Janet’s stand which led to 5 {ed} people gathering around her dining table to pledge their support for a new group. The army of litter pickers now number more than 200 and the team celebrate their 10th anniversary in March.

Janet, a member of Middlewich Community Pride, added: “In the beginning I was trying to sort out a problem on my doorstep. “Never in my wildest dreams did I imagine I’d be getting a British Empire Medal. “It’s very rewarding and exciting that other people feel the same way as me. “It might not seem very much to just look after the area around your street but multiply that by 200 and it makes a huge difference.”

In 10 years, Janet’s group has also helped set up clean teams in Sandbach and Crewe, has been in talks with community leaders in Winsford and Knutsford and has a meeting in Nantwich this month. Janet said: “One of our dreams was that we would start this and then roll it out across the country. “We want every town and village to take responsibility for their communities.”

MIDDLEWICH’S community leaders have praised Janet Chisholm for her royal honour. Fiona Bruce MP said: “Janet gives her heart and soul to the Middlewich community at grassroots level. “She is just the kind of person the Honours system should be there for and I extend my warmest congratulations to her on this richly deserved award.“ Deputy mayor Bernice Walmsley, Clean Team committee member, added: “Everyone in the Clean Team is so proud. “In Middlewich we’ve always known Janet is something special and now the whole country knows. “It’s often been said she deserves a medal and now she’s got one. We’re so pleased.”
Article reproduced by kind permision of the Middlewich Guardian
By Middlewich Clean Team|2013-01-10T17:06:00+00:00January 10th, 2013|0 Comments